Corazón won our hearts from the moment she was born.  The third filly born to Odalisca GF and Hilandero X, “Cora” shows tremendous bone, height, and presence, as well as great curiosity about the world.
.
She will be retained as part of the Caballos del Corazón family. “Cora” made her show ring debut at the 2016 IALHA National Championship Show in South Jordan, Utah, in September of 2016, where she won the National Champion Spanish Fillies 2 & Under title under the Spanish judge, as well as capturing “Get of Sire” and “Produce of Dam” National Championship titles with her full sister CDC Memoria.

In 2018, Cora went into training with Howard Peet of Peet Equestrian, with a focus on preparing her for a long career in Working Equitation.

The two did very well, finishing the 2019 season as the Introductory Level Young Horse Reserve Champion for North America. Cora also captured the title of National Champion Hunt Seat Junior Horse at the 2019 International Andalusian and Lusitano Horse Association’s National Championship show. We couldn’t be happier with her accomplishments.

Cora is now back in Oregon, competing in Working Equitation with her owner Karin Hansen. 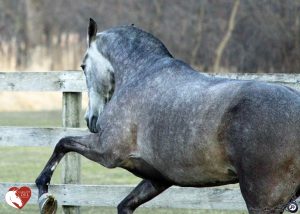